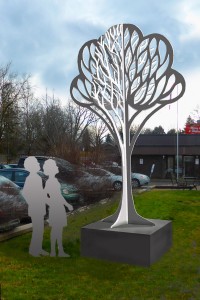 A memorial sculpture has been commissioned to honour Christopher Chapman, an eminent Canadian filmmaker whose honours included an Academy Award (“Oscar”) and the Order of Canada. His Oscar was for his iconic film “A Place to Stand”, created for the Ontario Pavilion at Expo ’67 in Montreal. The sculpture, to be installed outside the long-term care facility where he resided for the last three years of his life, is of a tree, with “summer” and “winter” halves. It’s called “The Seasons” —  Christopher’s very first film, which won Canadian film of the year, was titled “The Seasons”. The sculpture is of laser-cut aluminum, with its surfaces ground and polished. Installation mid-2016. 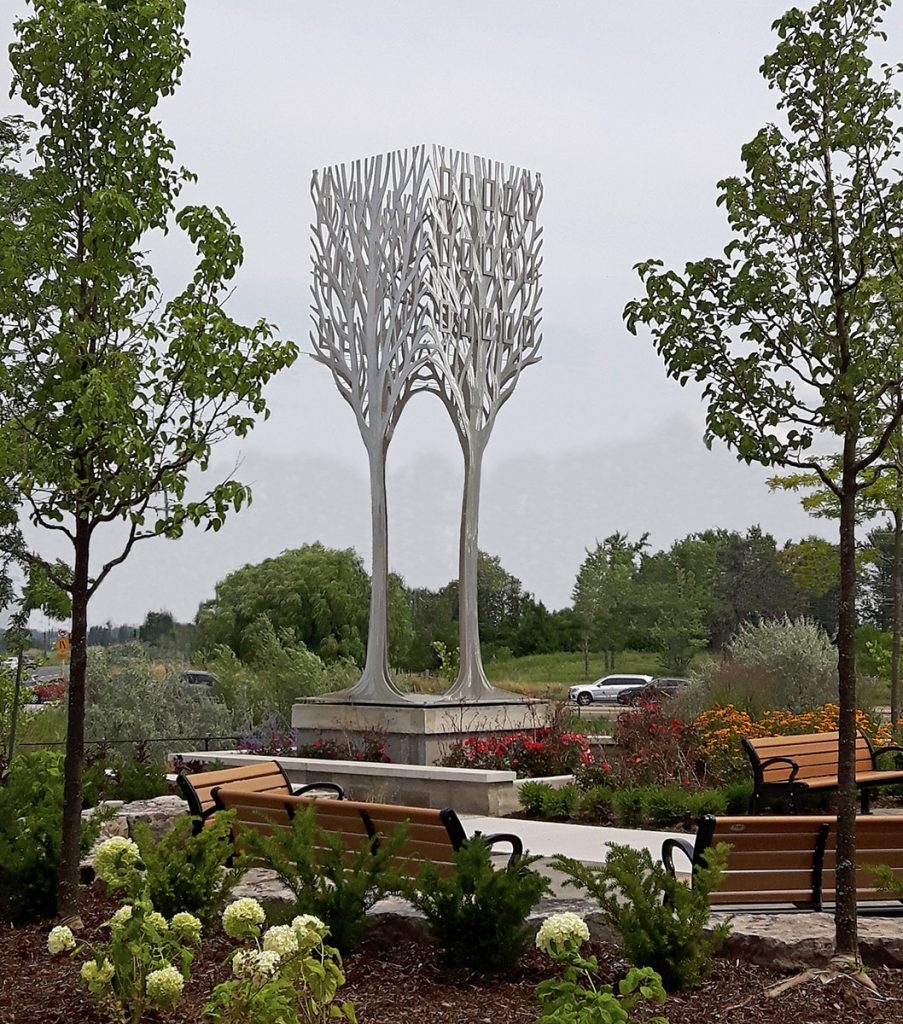 The Town of Milton, in coordination with a developer, has commissioned a large “gateway” sculpture, to be installed in Fall 2016 at the junction of the James Snow Parkway and Main St. – one of the main entrances into the community. It will be a 20′ structure of cut aluminum, with a forest figure (trees) forced into an urban configuration — a tree-structure condo tower, with windows on two of the sides. Theme: the meeting of urban and rural; town and country . . . which is how Milton started. 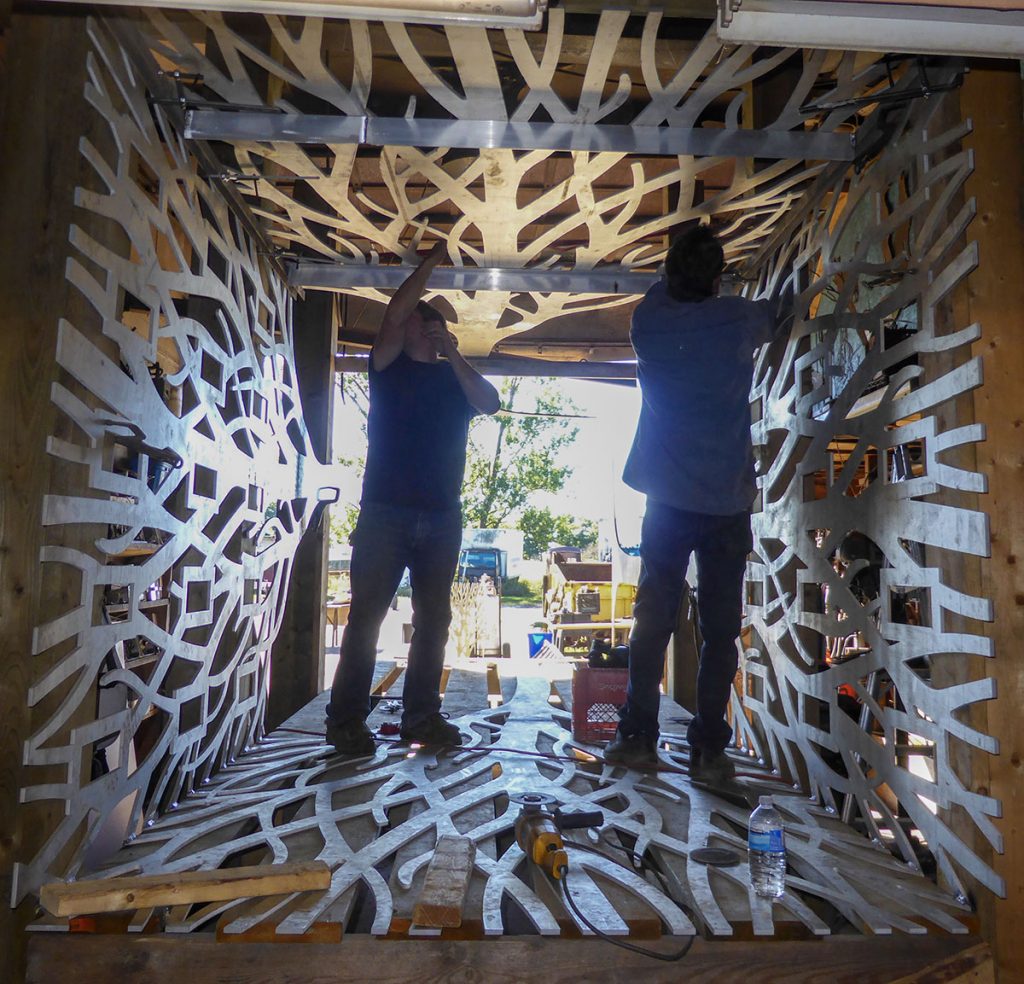 Sylvan City in fabrication, showing the size of the work. 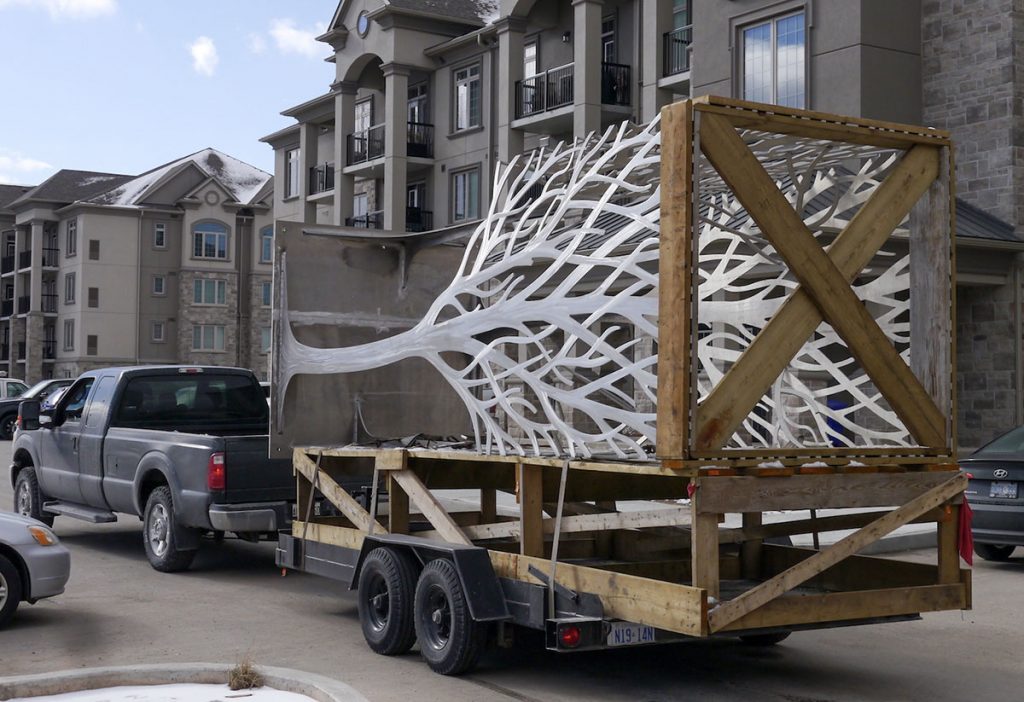 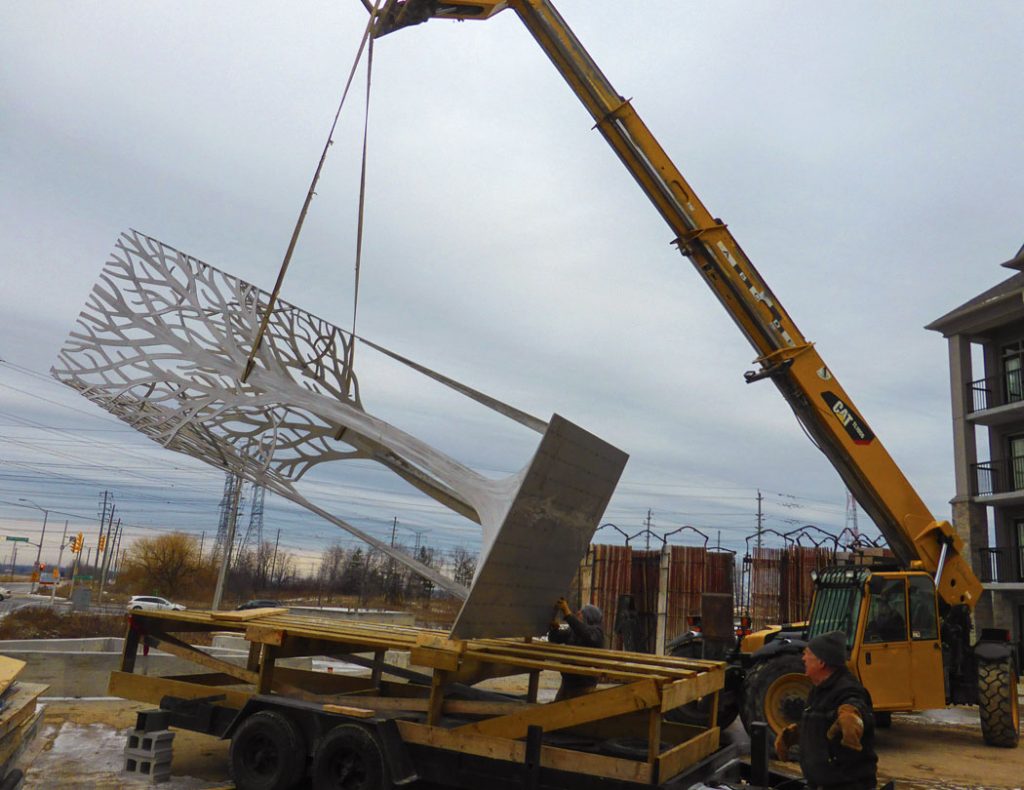 A current project is a life-size+ bronze sculpture of Col. Sam Sharpe, whose tale is briefly told below. The project has significant support from senior levels of government and the military, due to the timeliness of Col. Sharpe’s story, and its relevance to the current issues of PTSD and veterans’ well-being.  It is planned to install the final sculpture in Uxbridge, Sharpe’s home town. 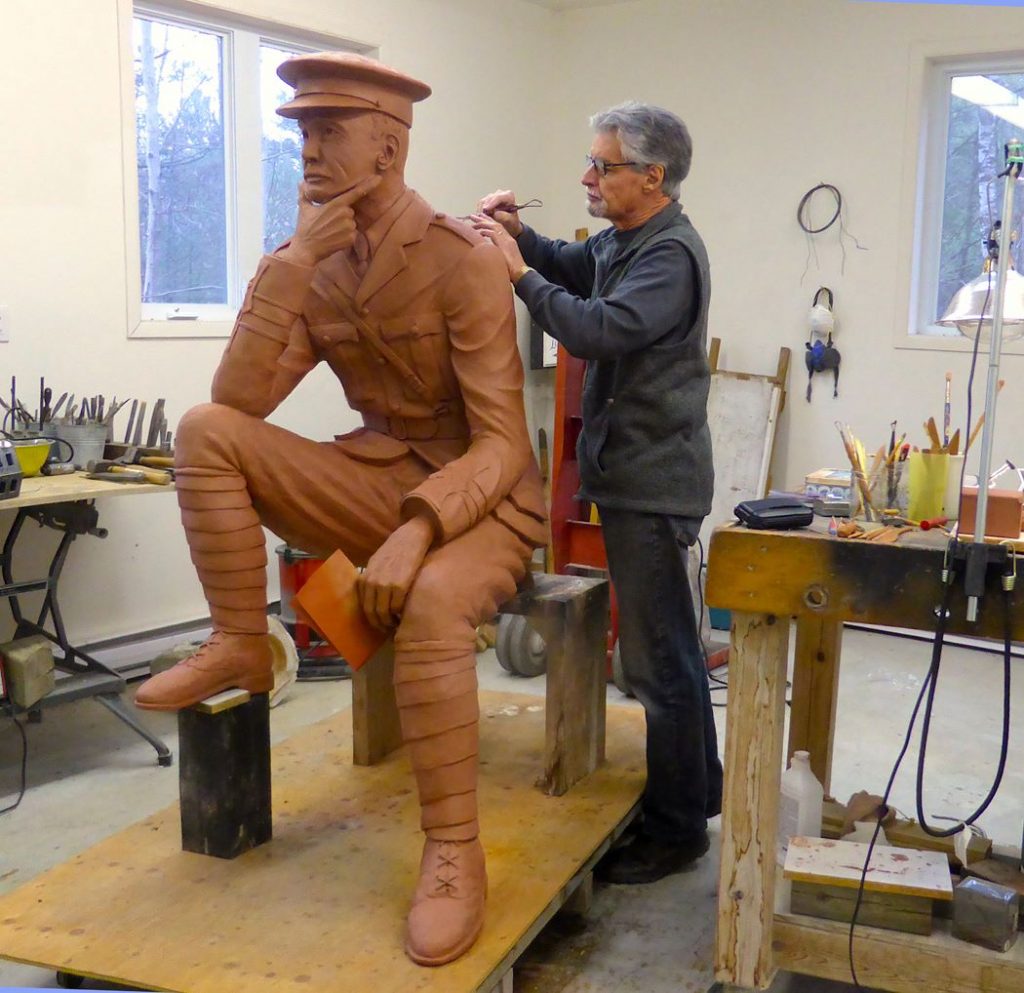 The monumental statue of Col. Sam Sharpe is nearing completion in the full-size clay version, which is really the final sculpture – this pic was taken this afternoon – down to the fine detail now. Hope to get it to the foundry next week for the two-month process of casting it in bronze. Sam and I have become quite good friends – I’ll miss him when he’s gone. Nov 16, 2017

It was announced in early February that a grant of $70,000 had been approved by the Canadian federal government’s Department of Canadian Heritage. With this funding the project is now going forward. The project cost will be about $140,000 – so strong community support will be needed, as well as contributions from military, veterans and other organizations. 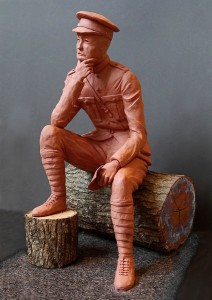 One of two sitting Members of Parliament to die in the First World War, and the only Member ever elected while on the battlefield.

Samuel Sharpe was a member of a prominent Uxbridge family, and served as Uxbridge’s lawyer for a number of years. He was elected a Member of Parliament in 1908. When the First World War broke out, he raised a battalion from the Uxbridge area and led them to Europe as part of the British Expeditionary Force. His 116th Battalion saw action at Vimy, Passchendaele and Avion, among other battle zones, losing many men. Sharpe led his men personally into battle, and was awarded the DSO for bravery.  He was re-elected in 1917 – the only member ever elected from the battlefield. 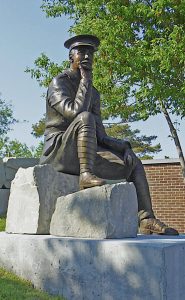 In 1918, Sharpe suffered increasing melancholy and then a mental collapse, following the loss of many of his men, including John Walton, a close personal friend.  In that era, it was called “shell shock” or “operational disorder”. Today we know it as PTSD (Post Traumatic Stress Disorder), and recognize it as a serious mental condition.  Sharpe was invalided to England, and then to Canada. While on a train home, he suffered a collapse, and was hospitalized in Montreal. On May 25, 1918 he jumped to his death from a hospital window. It was suggested by those who knew him that he could not face the prospect of returning to Uxbridge, and facing the families of those who had died, many of whom he had recruited personally. Of the 1,100 men he had recruited, only 160 returned alive.

Col. Sharpe is depicted as he ponders writing a letter, agonizing over how to tell Mary Walton that her husband has been killed. The letter in his hand begins: “Dear Mary . . .”  For almost 100 years, Samuel Sharpe was virtually forgotten – his name buried with thousands who had succumbed to “shell shock”.  Finally, he is recognized as a true hero, who died not in battle, but of battle.

There is a key, but subtle, message in the posture of the figure. Traditionally, in sculptures of military heroes, a figure with one foot off the ground (often in equestrian statues, the horse has one hoof lifted) indicates the subject died in action. In effect, such was the case with Col. Sam Sharpe.