Terry Fox and The Return

Public sculptures are usually awarded as a result of a competition. Sculptors win some, and usually lose more. However, the models created for these competitions are revealing. I always try to bring in a very human perspective, rather than the obvious.

An example is the maquette for a Terry Fox sculpture for a municipality which Terry ran through on his Marathon of Hope. I portrayed Terry supporting a young cancer victim . . . illustrating the purpose of his run, not just the run. The work chosen illustrated the run (yet again – there are at least eight statues across Canada of him running).

Similarly, another municipality was restoring its waterfront, and wanted a sculpture illustrating “The Return”. Instead of a very human image, they chose an abstract of three large raindrops.  Conclusion: you can never tell what motivates a jury. 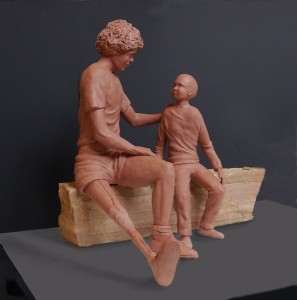